Government servant-turned-activist Kannan Gopinathan on Tuesday said a massive protest march was being planned in Delhi against the Citizenship Amendment Act (CAA), the National Register of Citizens (NRC) and the National Population Register (NPR).

Addressing a press conference at the Mumbai Press Club along with civil rights activist Teesta Setalvad and former IAS officer Sasikanth Senthil, Mr. Gopinathan said, “Citizens from all over the country are planning a Chalo Delhi march to show [the government] the number of people that are against these laws and exercises.” He said the dates have not been decided, but the march will be held before April, when the government plans to implement the NPR. 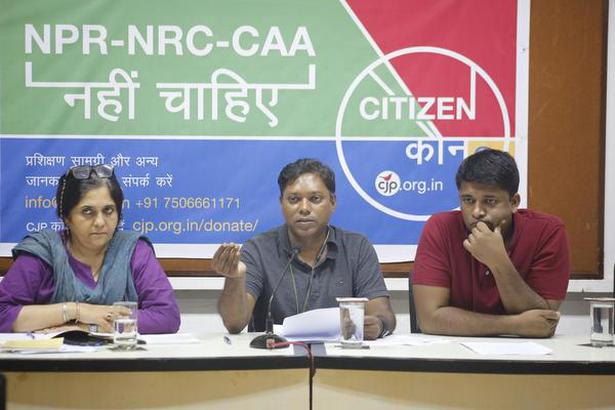 Mr Gopinathan also made an appearance at the Mumbai Bagh protest at Mumbai Central, which entered its 16th day on Tuesday. Activist Medha Patkar and Mumbai Congress president Eknath Gaikwad were also at the venue.

Ms. Patkar said, “Demonetisation couldn’t expose black money, and CAA will not affect intruders. Even Hindus have been labelled Bangladeshis in West Bengal. Of the 19 lakh people dismissed from Assam, about 13 lakh are Hindus.”

Mr. Gaikwad said the BJP is coming up with unconstitutional laws because it cannot fulfil its promises. “BJP ministers of Bihar and Assam are now opposing this unconstitutional law, and we welcome the development. The Shiv Sena, Nationalist Congress Party and Congress are in full support of the people. Even if the police issue notices, the government will withdraw them,” he said, referring to the notices issued by the Nagpada police to the protesters.

A delegation of journalists and photographers met the Home Minister on Tuesday. During the meeting, Joint Commissioner of Police, law and order, Vinoy Choubey opposed Mr. Borse’s suspension, saying it would affect the morale of the force.

The Mumbai Press Club termed the action as a “victory of journalists’ unity”.

The original report may be read here.

CJP moves SC to include MP, HP in its ‘Love Jihad’ petition Seeks amendment to original petition to add laws by other states