Human Rights in Jammu and Kashmir Annual Review by JKCCS

The Jammu Kashmir Coalition of Civil Society (JKCCS) has released its Annual Report-2017, A Review of Human Rights in Jammu and Kashmir. According to the report, 2017 saw “an upward surge in human rights abuses” in the valley, despite the fact that militant Burhan Wani’s killing sparked widespread outrage in Kashmir in the year prior…

N Ram, Publisher, The Hindu speaks about how CJP focuses on the victim and makes meaningful legal interventions to actually make a difference on the ground. He also commends how CJP never backed down despite strong reprisals from people in power.

Historian and political essayist Mukul Kesavan is known for his intrepid and often hilarious takes on what transpires on the Indian political landscape. Here he speaks about how CJP and Teesta Setalvad have always gone beyond mere tokenism and actually been in the line of fire for speaking truth to power.

It is a travesty that an organization like Citizens for Justice and Peace (CJP) which has done so much for the people of Gujarat and this nation, needs to be publicly endorsed by those of us who have not yet been bought, brainwashed or threatened into silence by the murderous political class and its business… 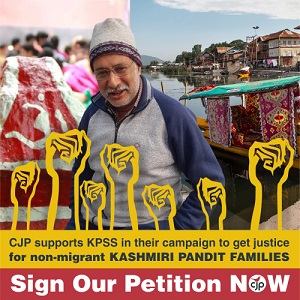